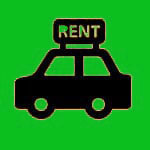 Reserve a Car for rent in Phangan and Koh Samui